For this activity, you will need the following materials: counters with numbers 1-30 on them, and 3 cauldron cutouts (you can print out this worksheet if you’d like).

Starting with just 2 cauldrons, place the counters into the cauldrons in ascending order – you can choose which cauldron each one goes in. However, there’s one catch: each of these numbers are highly potent alchemic ingredients, and under the right conditions, they can cause the cauldron to become unstable. If two numbers in one cauldron add up to a third number in that same cauldron, they bubble up and cause an explosion! This means that all the ingredients, or numbers, leave the cauldrons, and you must start all over again.

Our goal is to find the largest number we can place in either of the cauldrons without them exploding… do you think you’re up for this daunting task?

If you’re at all confused about the rules, you can watch the video below for a better visual:

When I first approached this question, I didn’t have any sort of strategy. In fact, I didn’t even know when to stop, or if what I got stuck on was right. I just rearranged the numbers until I felt like I couldn’t get any further. Here’s what I found: 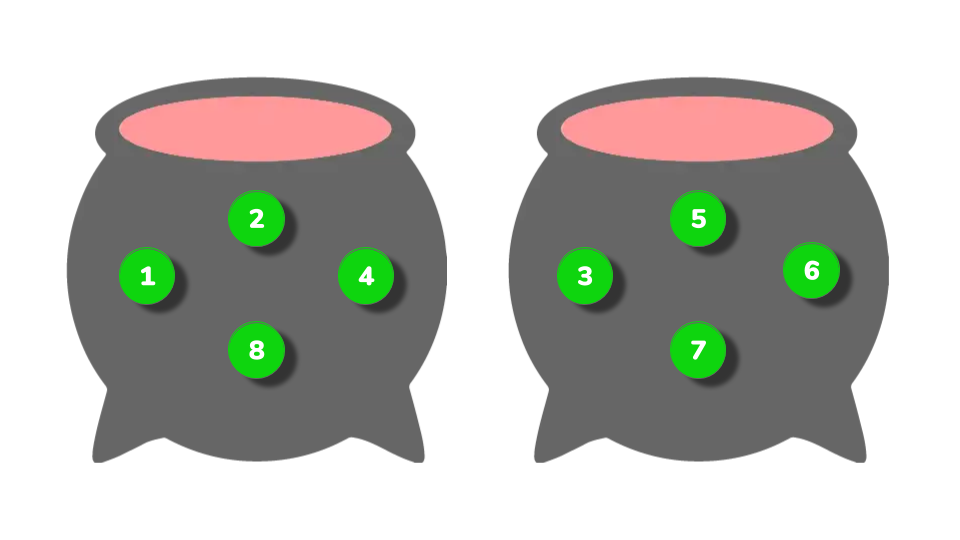 Ok, so hopefully 8 is the answer, I thought. Don’t worry – I’ve fact-checked this since then, and it is. However, it’s not all that clear in the beginning.

Now, what if I raised the number of cauldrons to 3? Assuming I keep the same rules from the last problem, what is the largest number I can place in the three cauldrons?

Since I already found what I assumed to be the best distribution of numbers for 2 cauldrons, I decided to stick with that setup for the first two cauldrons in this problem. After that, the only option for 9 was the third cauldron.

Thinking more strategically, I realized that I could keep adding numbers consecutively to the third cauldron up until the number 18, because the smallest possible combination of numbers in that cauldron would be 9 + 10 = 19.

After that, I was stuck again. 23 couldn’t fit in any of the three cauldrons. So, I decided, I’d found my answer.

Let’s go back to 2 cauldrons again (because keeping track of numbers gets tricky with 3). What if, instead of starting at 1 with my counters, I started at 2? Now what’s the largest number I can reach? 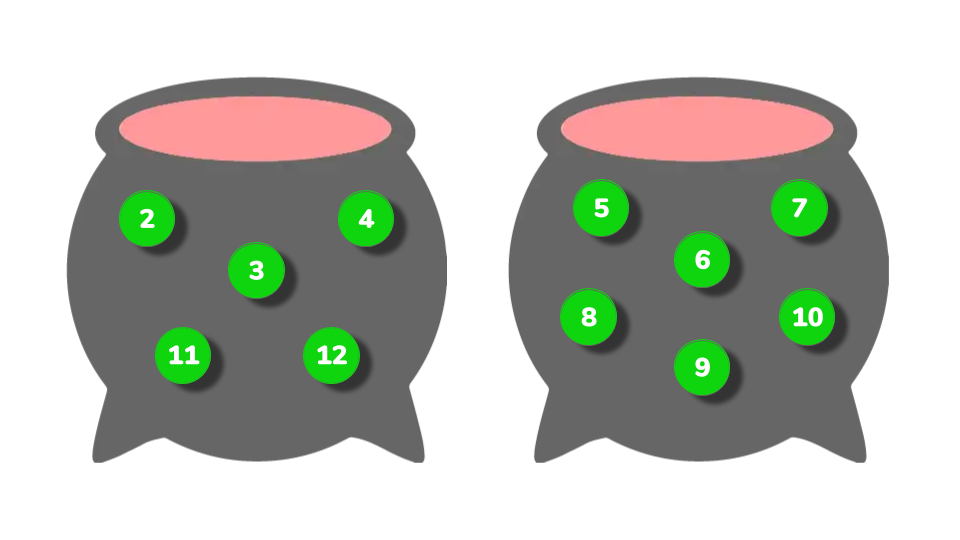 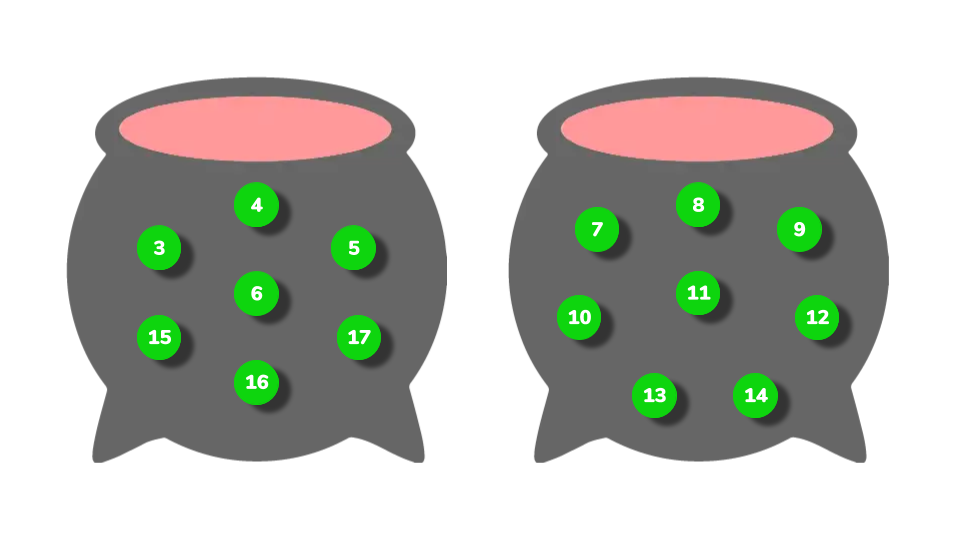 I was able to get up to 17. By this point, you may have noticed my strategy – one that didn’t quite work for Question 1, but seems to work for starting the counters at 2 and 3 (and hopefully 4, 5, etc.). I’ll lay it out here in just three steps: 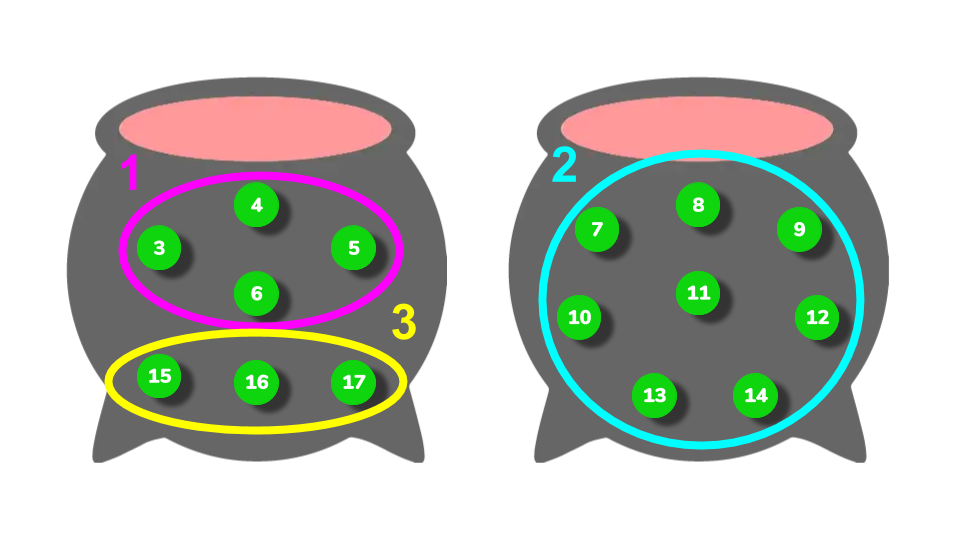 Find an expression for the largest number we can place in two cauldrons starting with any positive whole number.

If you continue to use the strategy from Question 3, it’s pretty easy to find the largest number possible for the next few starting numbers:

Only one starting number strays from that pattern: 1, which goes to 8 instead of 7.

Using the same strategy as earlier, we find that if we start at 1, we get numbers up to 23. 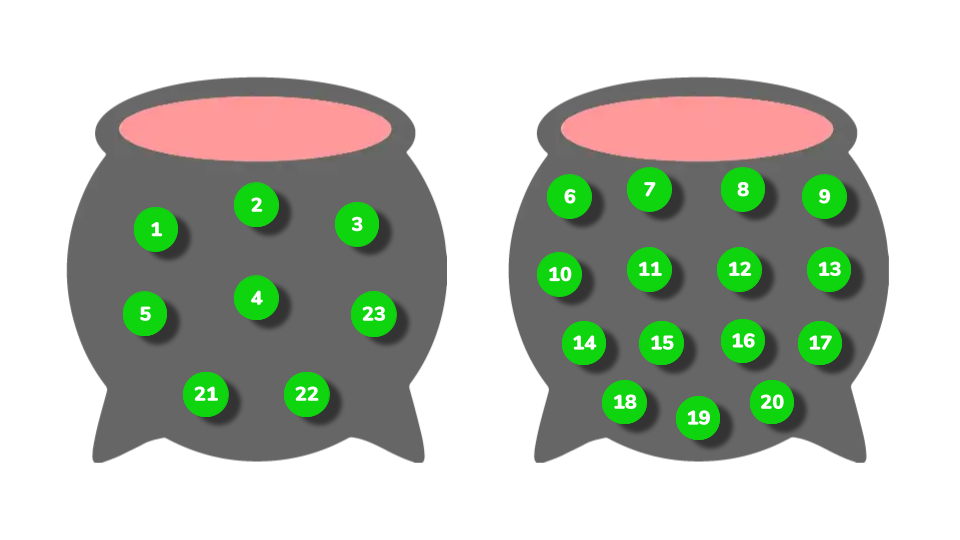 Congratulations! You’ve finished your official training at AIM’s very own Alchemist Academy! Now, it’s time for you to explore the mathematical world of chemicals and cauldrons all on your own. Good luck!