by Math For Love

This article was originally published in the Summer Math Mind Stretchers, Issue #1 by the AIMC (Alliance of Indigenous Math Circles).

Achi is a game played by the Ashanti people of Ghana in West Africa. This two-player game is played on a three-by-three diagram of horizontal and vertical lines and two diagonals. Achi is like tic-tac-toe, but with a twist. Each player has just four pieces, which they take turns placing on the board’s nine places where two or more lines intersect. The object is to get three in a row along one of the straight lines, as the person playing the white pieces has done in the second figure. There are two stages to the game: 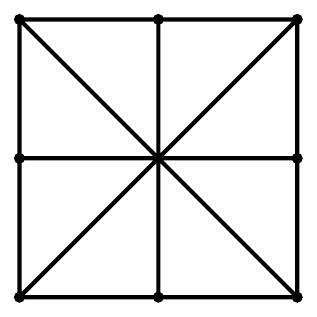 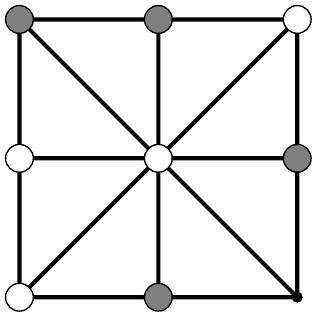 1. Starting with an empty board, players take turns placing their pieces.

2. If no one has won after each player has played their four pieces, players take turns moving one piece along a line into an empty position. No jumping is allowed.

You can draw the game board on a piece of paper, and use anything, such as coins or beans, for game pieces. Take some time to play the game with a partner. Then think about some of these questions and share what you find!

1. After both players have played all their pieces, how many empty positions are there?

2. Suppose that the center position is empty in stage two of the game, and that it’s the turn of the person playing the white pieces. Can you guarantee that white can win in their next move?

3. Suppose that black can’t move in stage two of the game and that the lower left corner is empty. What does the game board look like?

4. Suppose that black can’t move in stage two of the game and that the lower center position is empty. What does the game board look like?

5. Suppose we add a rule that a player loses their turn if they can’t make a play and suppose that black cannot make a play. Can you guarantee that white can win in their next move?

6. If both players play smartly (for instance, don’t pass up any obvious opportunities to win), can you guarantee that no player will get stuck?

7. How is the game different if each player only has three pieces?

8. Can you create an interesting variation with a different configuration of lines?