Let’s Make A Deal with Monty! 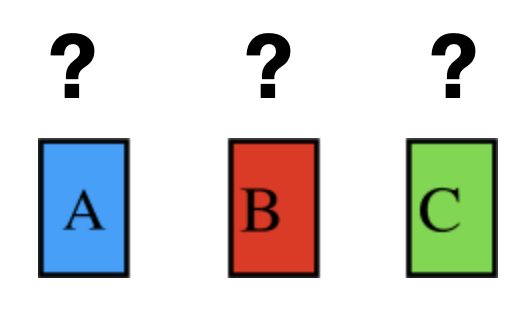 A prize is hidden behind one of three doors.  You choose the door where you think the prize is hidden. But before the door is opened, one of the other 2 remaining doors is opened to reveal no prize.  You must now decide to keep your original door choice or to switch to a different door in hopes of revealing the prize!  Sounds easy?  Beware! In this game of chance, things aren’t always as obvious as they seem!

Materials and Setup (per pair of players):

This two-player game is played in 2 rounds of 20 trials each.

Choose one player to be the “Host.” The Host always knows where the prize is hidden.

The other player is the “Guest.” The Guest does not know where the prize is located.

Place the 3 cups upside down in a row in front of the Guest on a table.

How to Play the Game:

Step 1: The Host asks the Guest to look away and to not peek.  When the Guest is not looking, the Host places the prize under one of the cups.

Step 2: The Guest begins each trial by pointing at or saying the letter of the cup where they think the prize is hidden (the Guest does not touch the cups).

Step 3: Before revealing the Guest’s choice, the Host lifts up one of the other two cups (one that does not contain the prize) and shows its empty contents to the Guest.

Step 4: The Host offers the Guest an opportunity to switch their initial cup choice for the other cup that still hasn’t been revealed.

Play the game 20 times using each of the following two scenarios:

There are no guarantees on any given turn for getting a prize. But if this game is played many times, it turns out that switching an initial choice is the best strategy!  Why?  Because the conditional probability of an event is the probability that the event will occur given the knowledge that another event already occurred.

The Guest Chooses Cup A and does not switch on each trial:

Explaining the results in the Scenario 1 chart:     This is an example of when the Guest stayed with Cup A.  Crossed out italicized words in the boxes indicate cups that have been eliminated by the Host. There is one “win” and 2 “lose” results.  Likewise, if charts were shown for the Guest choosing to stay with Cups B and C respectively, the same end results would appear.  Therefore, there is a 1-in-3 chance of winning the prize by always sticking with your first choice.

The Guest chooses Cup A and then switches on each trial:

Explaining the results in the Scenario 2 chart:    This is an example of when the Guest at first chose Cup A, but then switched cups when offered a chance to do so for each trial.  There are two “wins” and one “lose” result.  This means, if the Guest switches each time after one of the empty cups is turned over, they have a 2-in-3 chance of winning.  Again, if this chart were made for a different starting cup, the same results would occur in the end; the Guest would win 2 out of 3 times!  So, switching your initial choice is the best option in playing this game (but not the most intuitive!)

Other ideas for playing this game:

For younger students:  Try playing with 2 cups at first. The Host doesn’t reveal where the prize is.  Play in the same fashion and discuss what happens each time they either win or lose.  Could they improve their chances?  How?  Compare this to tossing a coin. Can they improve their chances of always getting a head or a tail?  How about tossing two or more coins?  This opens much discussion about choices, and whether or not what happens before another trial affects the outcome.