In 2016, Tara T. Craig (University of Texas) and I adapted Vi Hart and Nicky Case’s “Parable of the Polygons” (2014) for a Math Teachers’ Circle activity to consider the dynamics of a polygon neighborhood. In the neighborhood, polygons preferred having neighbors who were like them. Triangles enjoyed having other Triangles as neighbors, and Squares enjoyed having other Squares as neighbors. Polygons were unhappy if fewer than one-third of their immediate neighbors were like them. We played the game on physical boards, and we asked our participants to place or move polygons until everyone was happy. What could go wrong? 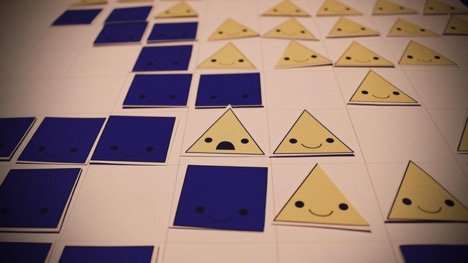 Participants quickly realized that the “game” had an undesirable twist—in almost every case, moving the Triangles and Squares to locations where they were happy resulted in a segregated neighborhood overall. In fact, this segregation is inevitable with the conditions that we started with (see Thomas Schelling’s 1971 game theoretic model for details).

In the first version of this game, we asked participants to think about strategies to lead to a different result as well as modifications to the rules. Some participants found that a perfectly alternating checkerboard of Triangles and Squares was one way to ensure everyone’s happiness while abiding by the rules of the game. Other participants changed the one-third rule or imposed new ones to demand more diversity in the neighborhood. We ended with a short discussion on the limitations of math models and the applicability of this game to our classrooms.

But this wasn’t enough.

Although our 2016 activity led to many fruitful conversations with teachers and students across the country, this was only the start. In the midst of a pandemic and during a time with racial inequities at the forefront of our minds, I approached Jaime to ask about better connecting the math content to her sociological expertise. Thus, version 2.0 was born.

During the first half of Prejudiced Polygons Version 2.0, we still operated under the same rules of the original game, but we started with a newly-zoned neighborhood and blank slate. This time, we asked participants to slow down and be more intentional about every decision that they made. As they drew in polygons to indicate that Triangles and Squares were moving, we asked: 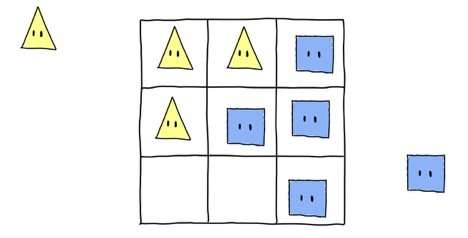 The model is, indeed, too simplistic to capture the intricacies of real-world housing decisions and the realities of racial segregation. However, engaging in the math task and asking questions about the polygon neighborhood helped to prepare participants in the second and sociological half of our activity on human segregation.

There are many reasons behind ongoing segregation in US schools, workplaces, and communities. Part of this is a legacy of legally enforced segregation upheld by Jim Crow laws in the South, as well as practices such as redlining, racially restrictive zoning, and enforcement of “racial covenants” that barred people of color from moving into white neighborhoods in the North. Despite the passage of civil rights legislation and fair housing protections, we know that vestiges of these practices remain. These discriminatory legacies reinforce segregation on both a structural and individual level.

Because our communities remain largely segregated by race in particular, many of us fail to develop meaningful relationships with people outside of our racial group. This is especially true for white people who, as the majority group, find it easiest to show up in a world where most people in their schools, workplaces, and neighborhoods look like them. Without the opportunity to build meaningful relationships with people from non-white racial groups, it can be easier for white folks to internalize stereotypes about other racial groups or fail to see beyond images presented on the evening news or other media outlets.

This allows segregation to persist because small individual biases tend to lead to larger collective biases, just like in our polygon neighborhoods. That is, it’s not necessarily that individuals oppose or actively dislike other racial groups, just that they feel more comfortable among people “like them.” Without meaningful interactions between racial groups, we lack opportunities to become more comfortable around each other and to view each other with true empathy. 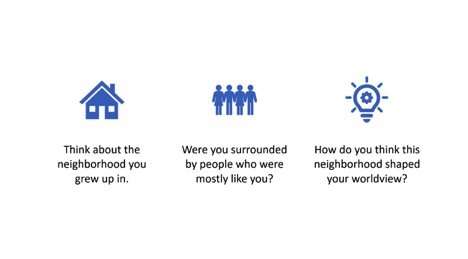 How do we develop more meaningful interactions with people who are different? How do we foster empathy? At the end of the session, we provided our participants with a range of sociological and math teaching resources. As we did for our session, we invite you to also consider your communities and your choices. We ask you to listen, to read our recommended resources, to build trust, to be active in your communities, and to get comfortable being uncomfortable in what needs to be an ongoing discussion.